I like Chibi-Robo. He is one of those quirky video game characters Nintendo is known for, along the same lines as Kirby, Olimar from Pikmin,  or any of the characters from Animal Crossing (especially my favorite video character to hate, Mr. Resetti). Besides their undeniable cuteness, they all share one trait: they don't follow the standard rules of video game conduct. Some don't fight. Some can't jump. Some don't do anything but go around cleaning up after themselves and writing each other letters.

Eventually, many of these games do end up as straight up beat-up-bad-guys or collectathons (or both). But the attraction of the game is often based on the uniqueness of the character and their non-gamey-ness.

Chibi-Robo is a robot who likes to help people. In the first game, Chibi-Robo on GameCube, you spend a lot of time cleaning up for a fairly dysfunctional family.  When I first played it years ago, the cleaning up — and the requirement that you sleep at night, which came far too frequently — ultimately interfered with my finishing the game. Similar to, but not nearly as severe as Nintendogs.

But I liked the game because of the character. Besides the oddity of being forced to clean up, his movements exemplified his personality: his movements were all a little loose as if the bolts weren't tightened enough and he blinked a lot. A real lot. A sort of robotic Charlie Chaplin.

Of the three games he has starred in, I actually think the second, Chibi-Robo: Park Ranger on the Nintendo DS is the best. You still have the naive movements, but with a little less work required. And the work is more constructive (you can grow flowers, for example). And the simplicity of the graphics played well into the DS's 3D limitations.

Which is why it is so shocking that the third game, Chibi-Robo: Zip Lash, went completely south. Oh, it is not surprising that the game play is weak. (You can read the reviews to see why it is a sub-par 2D platformer.)

Neither of the previous games were exactly perfect examples of their genres either. But what's really irksome about Zip Lash is they removed any signs of personality from the main character. He runs, he jumps, and his dashes (using his power cord). But most of all, he kills various bits of space junk — over and over again. Gone are any signs of naivety. He doesn't blink, he doesn't wobble. Even his happy dance when he completes a task has turned into some sort of egotistical victory lap.

There is no reason the character is there except for name recognition. He might as well be any  generic robot, a random Disney character, or a hotdog with wings. (Actually, the game might improve if it were that last item.) 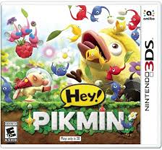 Applying Chibi-Robo to a 2D platformer did not necessitate destroying his character. You can tell that by comparing Zip Lash with another recent attempt by Nintendo to capitalize on existing intellectual property. Hey! Pikmin takes characters from another quirky game series (Pikmin and Pikmin 2) and adapts them to a 2D platformer. Hey! Pikmin has its own problems. It is too simple as a game, for one. And no one would say it has the emotional draw that the original games did. (You aren't going to cry over losing your Pikmin in this one.) But they are still Pikmin and the spaceman is still very clearly Olimar.And the gameplay is a simplified version of the originals. But most of all they are recognizably Olimar and Pikmin and, quite frankly, they are fun to play with. Which is often sufficient to cover over many other flaws a game might have.

Update: @chibitrobotweets points out that Chibi-Robo appeared in two other games as well:  Clean Sweep, which was released in Japan for the DS, and Photo Finder on the 3DS. They also say  that Clean Sweep is actually the best of the games in their opinion.
Posted by Andrew Gent at 7:22 AM No comments: