How We Perceive Games and Toys (Redux)

Two years ago I wrote an entry (Welcome to Gameland) bemoaning the way society is portrayed in the marketing of toys and games. My complaint (if you want to call it that) was that in marketing, the target audience for toys and games are portrayed -- to an overwhelming extent -- as children playing by themselves, almost never with adults.

Well, the next holiday season came and went. So I thought it might be interesting to see if the previous year's advertising was an anomaly or not. So I took five catalogs we received over the last Christmas holiday (2009)  and repeated the experiment. Four of the catalogs were dedicated solely to toys for children and one, Sears, had a significant toy section. I counted the number of images of people using the advertised products, determining how many were: 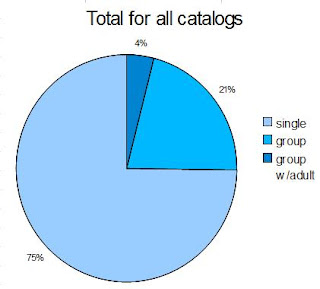 Not only are there more images of children playing together and with parents, the increase applies almost across the board. Of the catalogs I surveyed, only MetKids predominantly depicted children playing by themselves. 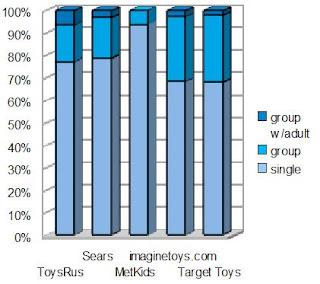 Obviously, showing children by themselves does not necessarily mean you don't think they play with others. Hiring two models is more expensive than hiring one. But it is interesting that there seems to be a shift to re-emphasizing the utility of toys for group interaction.

Of particular note, (although I didn't capture the numbers to prove it, it is just an interesting side note) many of the pictures of groups of children with adults involved outdoor play structures such as swing sets, sand boxes, and outdoor sports equipment.
Posted by Andrew Gent at 3:12 PM No comments:

Where is the etree for Poetry?

Where is the etree, trader's den, or dimeadozen for poetry? Where is the poetry channel for YouTube or the Internet Archive?

However, finding the actual poetry readings on YouTube requires sifting through pages and pages of "experimental" video interpretations and def jam promos. The Naropa Institute has done much more to bring at least one branch of America poetry to the Internet. However, the Internet Archive's poetry channel is starting to fill up not with readings by authors but ordinary citizens providing their interpretation of famous poems.

I'm not talking about poetry "slams" and def jam -- poetry as a competitive sport -- or my next door neighbor reading poetry. There is plenty of that to go around. I am talking about a more comprehensive view of the growing history and record of modern poetry (both American poetry and poetry from other countries and cultures).

When I was in school (granted, too many years ago to count), the discussion often turned to how poetry is an oral tradition, both in its composition and its presentation. Poetry readings were special events -- giving us the opportunity to hear familiar poems the way they were intended by the poet or to experience new work and new forms.

Now, granted, not all poets are good readers. But the poetry reading does provide a unique bond between author and reader that is not possible through the printed word alone. There are hundreds of poetry readings a year in colleges, libraries, and book stores around the country. Some of these readings are being recorded either as audio or video. But access to almost all of these recordings is currently closed or hidden.

Organizations such as the Lannan Foundation, University of Pennsylvania, and Naropa School of Poetics have done an amazing job to bring at least some of this material to the public. And there may be others I haven't discovered yet. But with these notable exceptions, much of the oral history of American poetry since the latter half of the 20th century has been lost.

For example, when I was growing up, there was an extraordinary series on public television called Poetry USA, including interviews and readings from Frank O'Hara, Anne Sexton, and Robert Creeley among others. Try as I might, I haven't been able to find any of these either online or as videos or DVDs. I know they were made available, because I saw them again when I was in college. But this piece of history seems to have been lost from neglect.

The organizations I mention above are doing what they can and should be commended for their efforts. But what about the other groups who sponsor readings? There is a reading at a college campus, a library, or a bookstore at least once a week across America. (Probably much more. Once a day? Or more?) Are any of these being recorded and if so, what happens to those recordings?

It is not just the responsibility of large organizations. We as audience and participants can just as easily take the initiative. In music, there is a very strong community of aficionados who are sharing live recordings through sites such as etree and dimeadozen. It would be nice to think the same could be established for poetry.

So what am I suggesting? Three things:

Poets and poetry readers tend to think of themselves as a small community. Which is true, within one's own limited geographic area. But cumulatively, the poetry community in America and around the world is huge. Rather than concentrating on how unique we are, perhaps we should start realizing the breadth and scope of the world of poetry as a whole.

Those who have recordings of poetry readings, either as audio or video recordings, should start sharing them openly. The monetary cost of publishing media on the web is approaching zero. Sites such as Archive.org and YouTube provide free storage -- as well as the necessary search and browse interface to make the content findable -- for free. The only remaining cost for college English departments, libraries, and individuals who may have existing recordings is the time needed to digitize them.

Although free storage is available, it is not always the easiest to find information in. The Internet Archive provides a basic structure based on media type and categories. But you often spend a fair amount of time sifting through miss-sorted lists of recordings. YouTube is perhaps worse because of its sheer volume. (YouTube is excellent for serendipitous discovery. Not so good at finding specific types of content.)

On the other hand, sites such as Pennsound provide a well-moderated, easily searched collection of recordings. Unfortunately, there does not seem to be any way for others to contribute to the existing archive.

What would be ideal is if there were commonly recognized tools and processes for sharing live poetry recordings.

In the world of music, sites such as etree and dimeadozen provide both a service for user contributions (through bittorrent) and a set of best practices and guidelines for sharing live recordings. These sites, although operating in a gray area of copyright law, do a remarkable job of self-regulation concerning what is allowed, what is required, and how to distribute live recordings that are both findable and usable.

Many of the specific rules (such as the use of lossless audio formats) used by music sites are not necessary for spoken word recordings. But the overall process, approach, and philosophy of sharing would be a good model for the poetry community to follow.

One alternative, since there will inevitably be both sponsored sites (such as Lannan and Pennsound) as well as community sites (such as YouTube and Archive.org) is to develop tools and sites to solve the finding problem separate from the storage problem. A live poetry specific search engine or directory (similar to Captain Crawl, livesoccertv, or other community-specific sites) could help tie together the multiple technologies in use.

Finally, since the current lack of sharing is not really a question of either technology or capacity, the most important goal would be to encourage everyone involved in recording live poetry to start sharing, both from the recorder and the performer's perspective. What is needed is a common agreement that the poet agrees to the recording and the recorder agrees to distribute the recording for free.

Often when readings are recorded, if there is any agreement with the poet, it is simply a verbal request to record the reading. There is either agreement or refusal, with little discussion of either the intent or planned use of the recording. This is problematic both for the poet and the recorder; the poet has little or no control on what is done with the recording and the recorder has no explicit agreement that they can distribute what they record. The recording becomes a legal "displaced person".

To both encourage non-commercial sharing of recordings and protect the people involved, it would be very helpful to have a commonly accepted legal document setting out the limits and accepted uses of the recording.

What I am thinking of is something simple, similar to the GNU Public license or the Creative Commons license, stating that the poet agrees to be recorded and the recorder agrees to make the recording available for non-commercial use. It would both explicitly exclude commercial release (for which the performer ought to be compensated if that is the goal) and require sharing rather than simply recording and storing. (Of course, this in no way precludes the poet from making deals for commercial recordings if they wish. The agreement would only be for personal-use or non-commercial recordings.)

Going a step further, it would be good to have the agreement specify exactly what license the recording will be distributed under (such as Creative Commons), to ensure that those who later receive the recording also understand their rights and responsibilities concerning use and redistribution of the recording.

Is what I describe possible? Absolutely. Likely to happen? I'm not sure. There are very few technical hurdles, but it would require some minor effort (such as developing the recording agreement) and significant promotion by interested individuals. I would love to be involved, but I am a little too far outside the mainstream of the poetry community to promulgate such a scheme myself. But I do hope something like this comes to pass before we lose any more of a very precious resource.
Posted by Andrew Gent at 2:31 PM 1 comment: