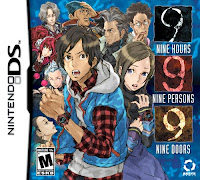 I am currently playing three puzzle games on the Nintendo DS. They are all different, but playing them together helps clarify what works — and what doesn't work — in each.

The first game I started was 9 Hours 9 Persons 9 Doors (affectionately referred to as 999). This is a puzzle/story game, where to progress through the story you need to solve puzzles. It is a pretty well-established genre, similar in nature to the Nancy Drew games, Professor Layton, Myst, etc.

999 is what might be described as a survival-horror puzzler, because the story involves your character, Junpei, being kidnapped and trapped on a sinking ship with eight other people. They must work together to escape before time runs out (the eponymous 9 hours).

Let me just say I expected to like this game. It sounded unusual and got quite good reviews for both its puzzles and its ambiance. But I was seriously disappointed.

The puzzles are fine. In fact, the game starts off well with a locked room puzzle of moderate difficulty. No wasting half an hour on simplistic "training" levels. Unfortunately, the game takes a turn for the worst, in several respects, when story elements are introduced.

For a story-driven puzzler, the story line is grisly and unnecessarily so. Death and mutilation is intended to give you as the player a sense of suspense and tension. But since you have so little control over the action of the game (except tapping the screen to advance the story) the gruesome events are only uncomfortable.

And the discomfort is extenuated by the unrealistic story line. You are trapped with eight other people who look like they just came from a circus (literally) or a Village People tribute concert. Each a unique and comically stereotyped representation of.... something. A belly dancer, a heavy-set laborer, an effete aristocrat... you get the idea.

To make matters worse, the story is presented in a crude 2D pantomime. Static images, with flat images of the cartoony cast (literally, drawn as cartoons) floating in and out of view like shadow puppets. This is suspense? Even viewed as a retro "edgy" presentation style, the clumsy graphics become tedious.

Worse yet, the awkwardness of the presentation carries over to the game play. At one point, you are required to turn a ship's wheel. A relatively simple puzzle device, given you are shifted to a direct front view. And with touch control, you would think it a simple thing to allow the user to touch and drag the wheel to turn it, no?

No. The UI puts up arrows pointing left and right above the wheel which you are forced to click on to make the wheel turn. They almost had to go out of their way to make the interaction so... unnatural.

And finally, the game fails at its own goal of making you feel like it is something more than just a handful of meaningless puzzles. For all of the portents, unnecessary curse words, and grisliness, the game is constantly forcing you to respond to relatively meaningless or obtuse statements and suggestions from the other members of the party. But when it matters, when something is seriously wrong and you — even if you believed the story and wanted to "play" — you are given no control except clicking and clicking and clicking while line after line of text inches past until your bizarrely frozen in place persona is killed...

Yes, I played all the way through to one of the "bad" endings. I was then given the option of replaying the game, with the advantage that I could jump through text and scenes I was already familiar with. No thank you. Once was more than enough.

While sorting through some boxes I had stored on a shelf in the basement, I came across a box labeled "small games". Inside I found many familiar items I had put away, but I also encountered one I had completely forgotten.

For many years my mother-in-law worked for the game company, Milton Bradley. She knew I liked games and puzzles and so she often gave me the latest games as Christmas and birthday presents. At one point Milton Bradley bought the small electronics firm GCE in an effort to get a foothold in the burgeoning video game market. GCE was developing a gaming machine called the Vectrex. Vectrex was unique in many ways: it used vector graphics rather than a raster display, it was black and white, it was an all-in-one design including a tiny 9" screen, etc.

Within a year, Milton Bradley decided to get out of the video game market and sold off its inventory of Vectrex to its employees at a steep discount. (I still have a complete working Vectrex system, which we bring out every couple of years.)

In addition to Vectrex, GCE created a series of handheld games. I had forgotten that she gave me one of these systems as well and that is what I rediscovered. 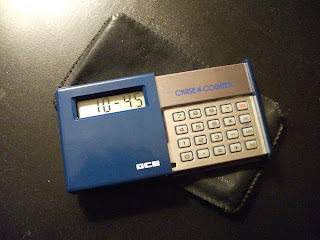 The GCE handhelds, such as CHASE-N-COUNTER, were also unique. Not because they used vector graphics (they use very crude LED displays instead), but because they doubled as a calculator. ("N-COUNTER", get it?) A sliding plastic cover switched the handheld from game machine to calculator instantly, hiding its other function. The ultimate "boss screen" in a way.

When I found it, the batteries were dead. But after replacing the batteries it works like new. Well... new, 15 years ago. No one would mistake CHASE-N-COUNTER for a modern video game. The rudimentary shapes (a single dot for your "character" if you could call it that) and the sparse plink-plink of the sound effects, and lurching movement take you back to — let's be truthful — a much more difficult time.

These games are not easy. Timing is everything. It is really you against the computer as you try to time your moves to the precise moment your dot jumps to the next LED and before the crushing "game over" sound indicates you missed it.

So, although the games are simpler, the play is much harder. It takes a lot of practice just to get the basics of the game down. But once you have them down, then it is simply a matter of increasing difficulty, with the same mechanics over and over.

This was true of arcade games at the time as well. Pac-Man is a good example. On your first try you lasted about 30 seconds. But if you kept at it, you could manage to clear several screens without losing a life.

That said, I don't know that I'm going to be playing CHASE-N-COUNTER again any time soon. It was a fun experience at the time, but it is hard to resurrect the interest (or the free time) that kept me at it originally.

But it is nice to see it still works. And just hearing those tinny sounds reminds me of the simple pleasures of concentrating on something entirely meaningless, but mesmerizing.

P.S. After finding CHASE-N-COUNTER, I also found an article written by the game's programmer. A great read if you are interested in the story of how such a game was developed.
Posted by Andrew Gent at 9:21 PM No comments: