The Work of Technical Documentation

Contrary to the assumptions of many, the job of technical writing doesn't involve that much writing. The actual act of writing is at most 30% of the work.

In fact, the more writing you do, often the worse the end product becomes. Writing is a test of understanding. As you write, you come to realize what it is you understand and what you don't.

The danger is that, when writing instructions for something you don't completely understand, you write more. You try to write around the parts you don't understand; you describe it two or three times in the hope one of the descriptions sparks understanding in the reader; or you simply transliterate what you are told, because you can't figure out what parts are important and what parts aren't.

The result is lengthy documentation that does more to obfuscate that elucidate.

So if technical writers don't write, what what is it that they do? Well, primarily we investigate. We learn so we can explain. This is particularly true of new products where often the developers themselves don't know exactly how the features will be used by the customers. 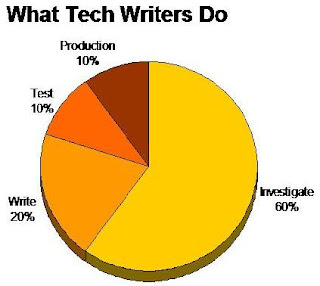 I lay no claim to scientific accuracy, but my estimate is that more than half of the time technical writers spend is used in investigating. Of the remaining time, about half is used for actually writing. The remainder is used for testing (to see that what we wrote is true) and "production" (proofreading, editing, and the tedious and finicky work of tweaking the content into the appropriate output).

Are there exceptions to this "rule"? Yes.